Connect an LED and Button to a Raspberry Pi

Interacting with electronic circuits is one of the great things you can do with the Raspberry Pi, utilising it’s General Purpose Input Output (GPIO) ports. If you are new to making electronic circuits then you do need to be careful as it is possible to damage your Pi by applying too much voltage to or drawing too much current from the pins. There are many Raspberry Pi beginner projects and here I will show you how to safely connect an LED and button to the GPIO pins and then control the LED using the button. While these circuits and the python code are quite simple controlling inputs and outputs is a great place to start before tackling more complicated projects.

Connecting A LED to a Raspberry Pi

Connecting a Light Emitting Diode (LED) is one of the things most people try when first building a circuit on the Pi. LED’s are like other diodes in that they will only allow current to flow in one direction and require a minimum voltage to “turn on”, once the LED is turned on the flowing current is converted to light and this is what we see. They come in several different colours, the most common being red, orange, yellow and green which all require a different amount of voltage to turn on. When connecting a LED to your Pi it is important to ensure you always have a resistor in series to prevent large currents flowing as this will very quickly burn out your LED.

In the following examples I will use the Broadcom pin numbering convention as shown below, as that is what is shown on the T-Cobbler.

Most common LED’s require a forward (turn on) voltage of between 1.2 – 3.6V depending on the color and a current of 10 to 30mA with 12 to 20mA being common. So to calculate the resistor value that we require we use the simple Voltage = Current x Resistance (V=IR) formula, or in this case R=V/I. So assuming that we are using a Red LED that requires a forward voltage of 1.8V and that we want a maximum current of 10mA.

If you wanted a maximum current of 20mA then you would replace 0.01 with 0.02 and end up with a resistor value of 160Ω, these are minimum values so you would select the next highest standard resistor value. It should be noted that the Pi’s 5V power supply can provide approximately 200 – 300mA, this should be considered when adding multiple LED’s to a circuit.

Increasing the size of the resistor would drop the current and dim the LED, this however is not recommended and you should probably never drop the current below 5mA as the LED may turn off completely. To dim an LED properly you should use the PWM facilities of the Pi but that is beyond what I am going to discuss in this article.

To start, shutdown your Pi, the simplest circuit we can then make is to connect the 5V pin of the Pi to a 330 Ohm resistor and then through the LED and back to Ground (GND). As mentioned earlier the LED will only pass current in one direction so it needs to be placed in the circuit the right way round. Current passes from positive to negative through the LED, the shorter leg of the LED is the negative one, if you have cut the legs down too the same length the other way of identifying the polarity is that the resin body itself will have a notch or flat spot on the negative side.

Once you have built and double checked your circuit restart your Pi and the LED will illuminate. 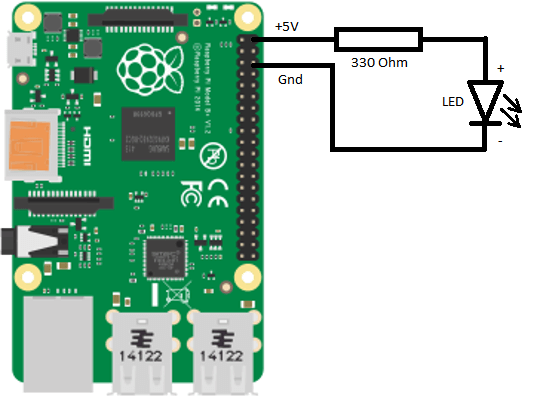 Now we have working LED circuit we can add some control with the GPIO’s. A GPIO pin on the Pi can safely provide (source) a maximum 16mA of current. As you can see above if we choose an appropriate resistor value then a LED could be connected directly to a GPIO pin without sourcing too much current.

The Pi 3.3V supply was designed to supply a current of 3mA per GPIO pin. If you load each pin with 16mA the total current sourced on a Pi 3 would be 416mA and the 3.3V supply could fail under those conditions. To ensure we do not damage the Pi we should try to keep the current as low as possible (1-3mA).

A better solution is to use a Field Effect Transistor (FET) as a switch to turn on the LED. We can take the existing circuit and add the FET by connecting the Drain to the -ve leg of the LED, connect the Gate to GPIO pin 17 and connect the source back to Ground. This will allow us to apply a voltage to the gate of the FET which will close the connection between the Drain and Source and allow current to flow through the LED. The advantage of this is that the FET draws almost no current from the Pi’s GPIO pin to achieve this. 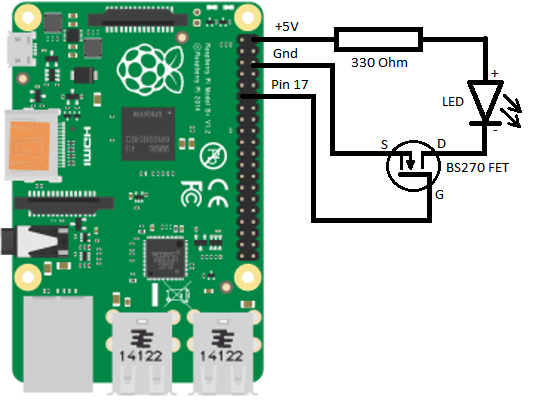 The following python code will blink the led every 0.1 seconds (10Hz), I am using the RPi.GPIO python library to control the GPIO, another good option is WiringPi but it does not come standard on the Pi and you will need to import it.

Connecting A Button to A Raspberry Pi

Finally we will add a button to the circuit and configure one of the GPIO pins to act as an input, we will use the button to start and stop the blinking LED. The GPIO pins on the Pi can accept up to 3.3V as an input so the circuit will go between the 3.3V output of the Pi, through the button and back to GPIO pin 27 as shown below, we do not need to touch our existing LED circuit.

We do not need a dedicated pull-down resistor in this circuit as all the GPIO pins on the Pi have software configured pull-up/pull-down resistors that have a default setting at startup. Pin 27 is set as pull-down by default which will stop any spurious voltages triggering the circuit. As a precaution though you should set the pin in software to pull-down just to be certain.

The following python code will set the pull down resistor on pin 27 and then wait for a button push by detecting the rising edge of the input voltage. Due to the mechanical nature of a button the connection is not smooth and will “bounce” when first making contact, to overcome this we can use the RPi.GPIO library to “de-bounce” the button by waiting 200ms after it detects the change before deciding whether the input is high or low.

With the code running we now have the ability to control the LED using the button attached to an input GPIO pin. While this is quite a simple example of controlling external circuits using the GPIO pins it has many applications in more complex projects.

This will return all of the channels you have used in your code back to inputs with no pull up/down resistors, this will help you to avoid causing accidental damage to the Pi or having conflicts with other code.